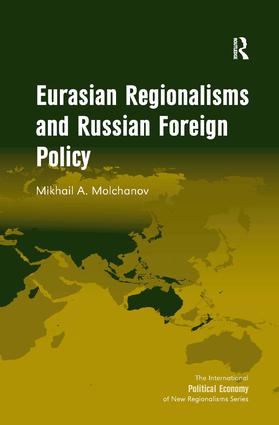 Mikhail A. Molchanov, member of our Think Tank and expert on international relations in Eurasia, has authored the book Eurasian Regionalisms and Russian Foreign Policy, edited by Routledge.

Bridging foreign policy analysis and international political economy, this volume offers a new look at the problem of agency in comparative regional integration studies. It examines evolving regional integration projects in the Eurasian space, defined as the former Soviet Union countries and China, and the impact that Russian foreign policy has had on integration in the region. Mikhail Molchanov argues that new regionalism in Eurasia should be seen as a reactive response to contemporary challenges that these developing states face in the era of globalization. Regional integration in this part of the world treads the unknown waters and may not simply repeat the early steps in the evolution of the European Union. The question of a hegemonic leadership in particular, as exercised by a country that spearheads regional integration efforts, animates much of the discussion offered in the book. Moreover, Eurasian regionalisms are plural phenomena because of complementary and competing projects that engage the same, or partially overlapping, groups of countries. By combining foreign policy studies with an examination of the international political economy of regionalism in Eurasia the author furthers our understanding of new regionalism, both theoretically and empirically.

Join 3,417 other subscribers
My Tweets