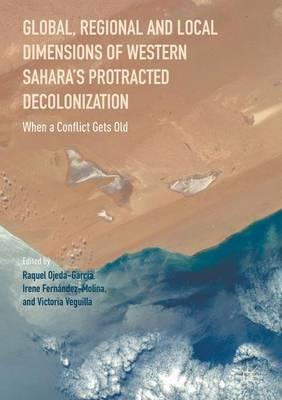 The book chapter “Western Sahara in the Framework of the New Moroccan Advanced Regionalization Reform”, co-authored by Ángela Suárez and Raquel Ojeda, has been published in the book Global, Regional and Local Dimensions of Western Sahara’s Protracted Decolonization. When a Conflict Gets Old. The book has been edited by Raquel Ojeda García, Irene Fernández Molina and Victoria Veguilla and published by Palgrave.

Global, Regional and Local Dimensions of Western Sahara’s Protracted Decolonization. When a Conflict Gets Old is a book which  explores the traces of the passage of time on the protracted and intractable conflict of Western Sahara. The authors offer a multilevel analysis of recent developments from the global to the local scenes, including the collapse of the architecture of the UN-led conflict resolution process, the advent of the War on Terror to the the Sahara-Sahel area and the impact of the ‘Arab Spring’ and growing regional security instability. Special attention is devoted to changes in the Western Sahara territory annexed by Morocco and the Sahrawi refugee camps in Algeria. Morocco has adapted its governance and public policies to profound socio-demographic transformations in the territory under its control and has attempted to obtain international recognition for this annexation by proposing an Autonomy Plan. The Polisario Front and Sahrawi nationalists have shifted their strategy and pushed the centre of gravity of the conflict back inwards by focusing on pro-independence activism inside the disputed territory.